Naval Order of the US – Northwest

Including Washington, Oregon, Idaho and Alaska – Welcoming veterans and their relatives of all US Maritime Services

NOUS Northwest is privileged to have among its members a large number of true historians of our nation’s maritime traditions.  Specifically included in that group is ETC Gil Beyer, USN-Ret, author of the newly released “Tin Can:  A History and Stories of a 20th Century Destroyer”, which became available on 29 July.  This is Gil’s second publication and is available at Amazon at TIN CAN. 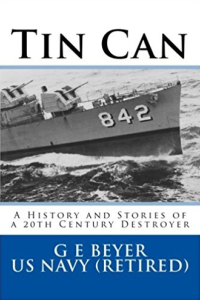 Amazon’s website describes this latest release as “a collection of stories and tales about a WWII era and Cold War participant destroyer that was served the US Navy from 1945 until 1980” and “the tales told about this ship are unique and told by the officers and sailors that served on her.”

This book follows Gil’s first work from 2015 titled “Tin Can and Fiske Tales,” a story of one ship that served the US Navy for 35 years.  Subtitled “An Incomplete History of the USS Fiske”, Gil says that the incomplete part stems from the fact that the book “is not and probably never can be complete. Too much time has gone by, too many of us have passed on and too many documents lost.” 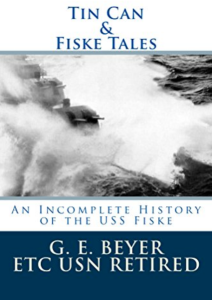 Gil writes in an Amazon review that “the late author Tom Clancy had one of his characters say in one of his early techno-thrillers, ‘If I don’t write something down it never happened.’ We choose to take that to mean that is if something isn’t recorded and passed on it may as well have never happened.”  Reflecting his deep love for the role of ordinary people in history, these two books will recall for the reader the memories and camaraderie of one of the Navy’s cornerstone vessels in its history, the “Tin Can.”

Gil will be reviewing his most recent “Tin Can” book in a Fall meeting of NOUS Northwest.  Stay tuned to this website for more details on that presentation.